Whew -- just finished my morning workout.  I unloaded the dishwasher, started some laundry, tidied up while i was in the basement, pulled weeds, cooked, and did "fur patrol" (a curious exercise which long-haired-dog owners have to deal with on a regular basis -- requires either a dustmop or a DirtDevil).  Worked up a good sweat, too.

And the Lancet (i learn via Zoe Harcombe) thinks that inactivity is driving the problem of overweight?  Even in our mechanized age with all of our labor-saving devices, a SMALL amount of LIGHT housekeeping is a workout.  We lift and step and bend and stretch a LOT in everyday life.  If there's any class of person who shouldn't be gaining, by CW rationale, it's young stay-at-home mothers -- taking care of small children is very work-intensive.

You think it might be something else that puts weight on "young marrieds"?

I noticed with interest, the last time i watched that excellent film version of "The Women" (1939), one of the earliest gym scenes i've ever seen; the ladies are tending to their figures ... because they can afford to.  (And also to defend their income in their competitive world, ie, to keep their husbands.)  Someone else is paid to do the housework.  Before that, you hear about exercise for weight loss from William Banting (didn't work), but literature is curiously quiet.  I read a goodly amount of fiction and nonfiction from the 19th century, and aside from the heroines going on walks (and the elderly taking their constitutionals), you don't hear much about what we would call "working out."

There was a "physical culture" movement amongst the sort of people who got into vegetarianism and utopian communities, but i only learned about it through a living-history friend who goes in for abstruse fads of the 1800s. 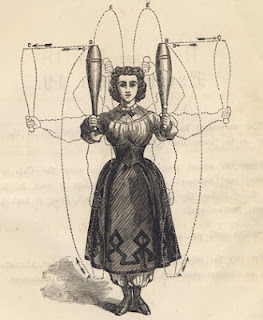 From what i can divine, though, Sport was all about FUN rather than fat-burning (as i believe it ought to be today).  Women's magazines showed tennis dresses and bicycling ensembles and swimming costumes ... and there have been special outfits for horseback-riding for over a millennium.  I've yet to see anything that was DESIGNED to be perspired in.

IF exercise helped to keep the population lean in the 19th century, it was in concert with their dietary practices, and certainly not the kind you see today.  It was the built-in movement of people who LIVED life rather than observing it.  People whose intact metabolisms made them want to move around.
Posted by tess at 1:52 PM

Email ThisBlogThis!Share to TwitterShare to FacebookShare to Pinterest
Labels: exercise