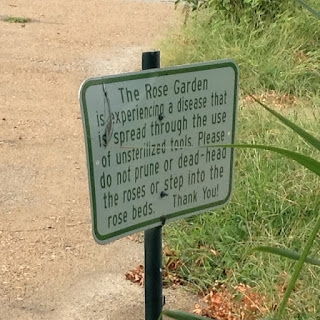 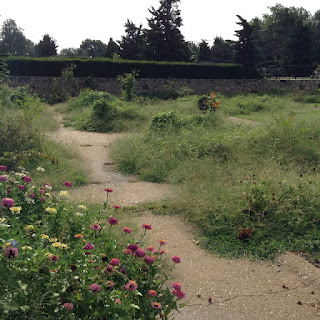 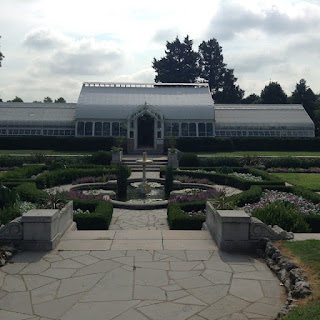 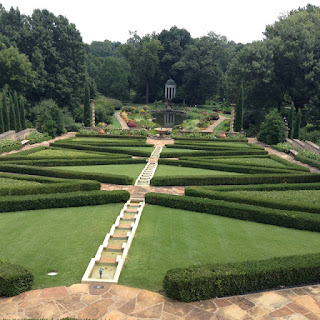 After spending hours perusing plants, historical relics, and works of art, i was ready to relax for the rest of the afternoon!  This morning we checked out of our hotel and began a NEW adventure ... but more on that later....
Posted by tess at 7:43 PM 6 comments:

Not much is going on with me, except an ongoing war with the squirrels in my garden!  The bunnies seem to be stymied by the raised beds and knee-high fence on the side they could access, but the squirrels have stolen three or four ripening tomatoes.  I daren't poison them, because if they die in the yards to the east or west of us, dogs might suffer.  So we've bought some "critter barrier" netting and stakes, and will try to fence THEM out, too.

Not a single word of new information is coming from the nutritional world, that i've seen.  Of course, there continue to be BS articles and studies reported by corporate media, and the slap-downs from our favorite researchers, physicians and journalists.  There are also confirmations of things WE were convinced about a decade ago -- that's great for people just making up their minds now, but the rest of us are yawning.

My husband has independently discovered the efficacy of 2-5 intermittent fasting.  He is becoming pretty consistent about designating Mondays as fast-days, and extending it at least until Tuesday supper, and is getting good results from it.  I join him for Monday, but i usually have to start eating again at lunch-time the next day;  individual tolerance of fasting is obviously quite variable!  It works quite well for us to do it this way, though;  the rest of the week, he eats pretty much whatever he wants, and i'm more liberal with myself than i might be otherwise.

The light-triggered not-really-hypomania-but-something-similar, which i noticed in the late spring, is getting better.  Interestingly, i never noticed it before this year!  I've been controlling it with valerian, and keeping dark chocolate at my bedside to help me get back to sleep if it wakes me up.  I've cut back on caffeinated coffee some days, too (and i don't allow myself caffeine or nicotine after 4 in the afternoon, either).  I'm inclined to hypothesize that the insomnia many older people face is because of a dysregulated stress-hormone system.  Valerian seems to help control its secretion.

Self-awareness is truly the key to health when it comes to our diet.  I've gotten to where i can tell what macronutrient i need, if i sometimes feel unsatisfied in the evening.  I can tell when i need more B12 or iron, or magnesium, or salt -- definitely!  I can tell when i've taken in more carb than my body prefers.  Younger women with very-busy lives probably aren't going to be able to do it -- they're paying attention to too many other things to be able to devote attention to subtle physical clues, on top of their constantly-fluctuating hormonal balance.

You bet your ass, i wish i had learned 30 years ago what i know now, but i recognize how unlikely that would have been.  ;-)

The other day when I posted, I named it before I wrote it, and then managed to forget to say something.  Oh well, whenever I post while busy, I often make mistakes of that nature!

The redundancy I was referring to is what has been going on in the LC nutrition world I frequent.  There is very little under the sun which is new, unfortunately.  ;-)  I'm the member of a few private groups on facebook, and a lot of the posted studies and articles are either repetitions or confirmations of everything we low-carbers are already convinced-of.

Resolved:  that butter is good for you;  that sugar is bad for you;  that the amount of starch you can handle is extremely variable, depending on many things;  that the people who make our policy are dangerously influenced by processors of junk-food....

I suppose I should be glad that good studies/articles that support my own observations are out there -- the best-written of them I pass along to my friends who are interested in diet-influencing-health but who don't have my free time or passion for the subject.  I should also be unsurprised by the corruption of researchers (it's much harder to fool clinicians) who insist that metabolic and neurological toxins are okay "in moderation," but it still infuriates me.

In the end, that's why so many bloggers slow way down in producing fact-filled posts, or like me, change the discussion to observations of anomalies of experience.  I really miss the frequent expositions that Wooo used to treat us to, concerning everything from sociology to pharmacology, to her entertaining rants.  I sadly miss J Stanton, too, but he pointed this situation out a long time ago, here.