The old adage goes, "the proof of the pudding is in the eating" ... not that i've had more than a couple of forkfuls of REAL pudding since i went low-carb!  :-)  I keep promising myself to make a LCHF version every winter, and keep procrastinating....

But i like that expression:  to me, it means that no matter what theorists and armchair "researchers" claim, if it doesn't pan out in the real world, it just ain't SO.  Especially in the diet-and-nutrition sphere, there are a lot of things which are assumed to be true about food and absorption which may have been "proven" in tests on young, healthy subjects but which fall very flat when practiced by time-worn and metabolically-faulty people like me.  For that reason, i'm very skeptical of claims surrounding supplements and regimens -- especially those touted by gym-rats who are younger than i am.  I NEVER assume that what works for others will be beneficial for me, so i'm always surprised and delighted when some things ARE.

Over the last five years, i've tried SO many new things it would be hard to enumerate them -- from patterns of exercise to meal timing to hygiene practices to individual-micronutrient supplementation to microbiome-tweaking to neurotransmitters to variations of diet....  Some worked and some didn't, despite the fact that numerous people out there swore by their efficacy.  And none of my experiments were one-day-and-give-up situations -- i read up thoroughly beforehand so i was usually convinced i didn't just do it wrong.  A lot of things i gave a second chance before marking them as failures, and EVERYTHING that worked i stopped and restarted, to make sure it wasn't just coincidence or placebo effect.  An old lab-tech like me does know a little about proper experimentation.

So with my mood and fatigue issues going distinctly downhill over the last year, I set out to fix the situation before i turned into a complete basket-case.  I researched what has been found to treat stress successfully, from a nutritional point of view, and increased my magnesium supplementation by about double.  Within a few days i started feeling better.

Stress, both physical and psychological, depletes magnesium.  Caffeine does too, AND alcohol.  Guess what i've used more of to combat weariness and irritation?  So do things like antihistamines ... and this has been a hellish year for weather that promotes mold.  As with so many other things, older bodies like mine tend not to absorb magnesium well.  My levels must have been at gutter levels -- no wonder i was beginning to melt down!

When one gets to the nutritionally-stressed stage, things go bad at a geometric rate.  One's coping mechanisms are GONE.  It's not possible to pull oneself together because the tools with which to do it are no longer there.

Figuratively speaking, i dug out the box and got me a POWERtool which i had stashed away -- magnesium.  Even though my multi contains the RDA, i increased my intake to a level found to be effective for severely-deficient people ... and it was.

But "the RESSSST of the story" is, i think that either some of the soil brought in by the landscapers had god-only-knows what kind of contamination in it, or maybe, the cement blocks they're cutting (with much dust going everywhere) are "poisoning" me.  There are times when it's almost as though something is overriding my brain-function!  Despite the beautiful autumn weather we've been enjoying, i'm having to close windows facing the backyard;  i even got my husband to dyson the bedroom and empty the dust-container directly into the outdoor garbage, to try to get any tracked-in dirt out of the room in which i spend so much time.  I replaced both kinds of filters in the air-cleaner, too.  Then we bought a new microfiber mop, to efficiently clean the tile floor in the sunroom.  I'm looking forward to the time that the landscapers have the autumn planting done, and we get grass and mulch holding down the bare soil out there!  Till then, there won't be a prayer of me giving up my Benadryl.
Posted by tess at 8:41 AM 6 comments:

I procured and read "The Magnesium Miracle" last week.

Having been undergoing a lot of extra stress for a WHOLE YEAR, and certain rather over-the-top symptoms that it was actually undermining my health -- not to mention the goddamned FDA's demand that my most important supplement be discontinued -- i went searching for SOMETHING that would take the strain off.  Magnesium WOULD seem to be "it," but i tell ya, some of the literature is really full of shit.

The "authorities" (the very word has been making me cringe for several years now) have awfully narrow vision.  Everything seems to be a nail requiring their particular hammer.

It's no secret that magnesium intake in the modern western world has taken a nose-dive.  The sources where we used to find it -- like nice clean ground- and well-water -- just aren't there anymore.  Farmland has been sucked dry.  The "best sources" are anathema to my system:  phytate-rich grains, seeds, legumes, and the kinds of green vegetables that are virtual toxins to me unless cooked ... which leaches out the mineral i seek.  Shellfish have a modest amount, and i am an avid eater of it, but not every damned day.  No, magnesium MUST be supplemented.  In quantity.  Which tends to be laxative.

Because it's a component of hundreds of crucial enzymatic processes, and also acts as a calcium-channel blocker, anti-inflammatory and antioxidant, many writers i respect give magnesium pride-of-place in micronutrition.  The doctors Eades and Emily Dean eulogize it, and deplore the lack of "real" studies about it;  because of the way magnesium works with other nutrients, it's very hard to tease out what it can take credit for, in epidemiological and observational work.  And as the book says, "As long as people are given false hope that there is some magic bullet in the pharmaceutical pipeline that will 'cure' osteoporosis, or any other chronic disease, they will ignore the underlying diet-and nutrient-related reasons for their health problems."  Nobody, anymore, cares to do research that doesn't have a potential cash windfall at the end of the rainbow.  Our universities are merely introductions to the world of pharmaceutical "research," not sources of work for the public good, as most citizens -- who are footing a lot of the bill -- would probably imagine.

And these are a few reasons why Dr. Carolyn Dean's book is so frustrating -- despite a bone tossed to the Weston Price people and a couple of mentions of "paleo" (which she doesn't seem to understand properly), she is firmly ensconced in the dietary paradigms of the '70s.  She repeatedly decries meat, protein and fat, especially the saturated kind, of course.  She insists we should be eating vast quantities of raw greens, soaked legumes, and untoasted seeds DESPITE THEIR CONTENT OF OTHER MINERALS WHICH BLOCK THE ABSORPTION OF THE ONE WE'RE ACTUALLY LOOKING FOR.  ...At least she has HEARD of phytates....  :-/  ...But as i said above, OY.

Most of the book's sources are VERY old, and in place of chemistry we get a lot of anecdotes.  Most of her chapters seem to be not much more than dumbed-down versions of a Dr. M. S. Seelig's decades-old book.  I'm in the process of reading the latter now, which is available online, but the major focus seems to be cardiological rather than metabolic ... which is of course the part i really want to know!

So although magnesium DOES seem to be a mineral i need to know better, i got far more solid info on its potential from Mike Eades in ONE blog-post, and from Emily Dean in two, than from the most-touted book i've found.  I WILL keep looking as well as continuing the extra supplementing i do (above what's already in my multi), but at least i can report that my mood HAS already improved.  It's far too early to report positive metabolic results.
Posted by tess at 10:03 AM 8 comments:

J discovered a delicious recipe for sangria not long ago, made with strawberries and Campari added to lambrusco wine -- we ended up using a basic dry red, as the bubbly stuff was sorta lost in the mixture.  Yum!

Well, being my favorite time of the year now -- autumn -- it occurred to me that a slightly altered version might be very seasonal ... at very least in COLOR! 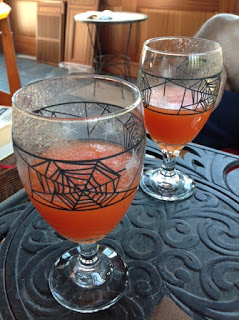 Blend all together thoroughly, and serve on the rocks ... or maybe use frozen blackberries for a seasonal color look.  I actually added a few drops of Holy Trinity Bitters, but i think a couple of drops of tabasco or a small sprinkle of cayenne would make a good replacement.

It's a beautiful shade or orange, inspiring the description i offered in today's blog-title.  :-D  Happy October!
Posted by tess at 8:17 PM 2 comments:

I spent a lovely afternoon with our "Exceptionally Brash" friend from California, who is visiting right now in St. Louis!  :-)  What a wonderful surprise to hear from her, and a joy to meet one of my "blog family"!

We enjoyed lunch together, in company with her charming mother;  we even ate "innocently!"  :-D  i sure hope she gets in touch again, next time she's in town!
Posted by tess at 9:07 PM 10 comments:

This begins my favorite time of the year!  The temperature drops so that even if it is on the humid side, it's not uncomfortable.  Trees here become outstandingly beautiful.  And i enjoy wearing boots and jackets and scarves -- dressing for the weather means more dashing outfits are appropriate.

Autumn also means that soups and stews are good choices.  I've been a soup enthusiast all my life!  Chili and gumbo CAN be eaten year-round, but they're much more attractive when their heat as well as their HEAT is appealing ... and who wants to toil in the kitchen when it's 90 in the shade?!

Last night's forecast was temperatures in the 40s;  i came out to our almost-finished sunroom this morning in my kimono and drank my coffee in front of the gas fire, feet on the hearth.  [sigh]. Lovely!

When lunchtime came around, i pulled out a can of minced clams, cream, and the konjac flour, and made us a batch of chowder:

In a medium saucepan, melt the bacon grease and brown the onions slightly.  Add the garlic and stir a minute, then add the clams with their liquid and the juice.  Bring to a boil, then add the cream;  when it returns to a simmer, whisk in some konjac flour SLOWLY -- it's very easy to overdo!  Correct the seasoning, which to my tastebuds was just a little black pepper.