I just got a little present in my email in-box: 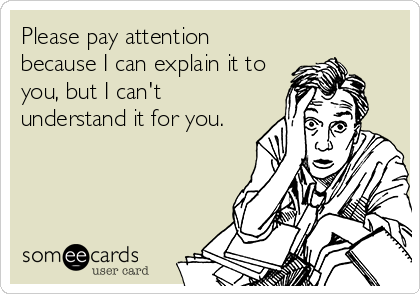 All right, I know that if you’re reading this you’re probably convinced that paleo is like the best damn thing since sliced bacon.... I also know that a lot of you think that you have it totally figured out and that there’s no question in your mind that you’re doing everything exactly right.... Well, I’m here to clear up a few things, and here’s my short list of stuff that you need to think about… (Brace yourself, this might hurt a little bit.)

Arrogant much?  He can't "understand it for us" so obviously if we don't agree, it's because what he says is zipping over our heads.  But listen up and try real hard, cuz we NEED to think about what he thinks our faults are....

I find that it's only a matter of time before an above-average coach or teacher begins to think they're much better than they really are.  If they spend more time with students or clients than they do with peers and superiors, they not only get used to being THE authority in the room, but the admiration of their underlings (sometimes adORation) leads them to believe THEY are the greatest thing since sliced bacon ... and that everyone is dying to taste.

Yes, I know, steak is awesome, bacon’s delicious and chicken is pretty ‘clucking’ tasty too; BUT as is true with most things in life – too much of a good thing is still TOO MUCH! One of the biggest mistakes I see folks make – they go whole “hog” for meat and fat but completely neglect vegetables and really anything other than meat and fat.


If you're eating all meat you're doing it wrong?  You mean if YOU eat all meat it's wrong.  How the bloody hell do you know what's right for a person you've never met nor spoken to?  How do you know what kinds of intolerances and preexisting conditions are suffered by people to whom you spew this highly-generalized tripe?


If your plate is made up of primarily protein and fat with a token broccoli spear or two, you’re doing it wrong. Seriously folks, you don’t need a pound of meat, eight strips of bacon and an entire avocado at each meal. Vegetables first! (and I’m not talking about sweet potatoes, yams, potatoes, parsnips or the other starchy stuff – but, like, REAL vegetables – think green…). Consuming copious amounts of meat and fat does not make you ‘better at paleo’. It does make you constipated, nutrient deficient and in a lot of cases, less than lean and/or healthy.


Contrary to what some say, not all of us need to be in ketosis; in fact that may be the worst thing some of us can do. That being said, there’s no reason to be eating starches and sugar ... 24/7 either and this is especially true if you’re not active, trying to lean out or lose weight or have issues with blood sugar regulation. The exact balance is going to look a little different for everyone....

Nice of him to finally notice that not everyone in the room is a mirror-image of himself, isn't it?  Still, the tendency for this guy to think that anyone who isn't doing exactly what he's doing is obviously an extremist wacko is an insult to ALL of us.


Not so (Intermittent) Fast… Yeah, SLOW DOWN before you jump on this bandwagon. Intermittent fasting is made out to be this awesome way of eating to get you healthy, lean and make you a serious badass. Well, I hate to burst your bubble here – it’s not a good fit for everyone and may do more harm than good in some cases (women and type 1 diabetics – I’m talking to you.).

This is where I stopped actually reading the email and decided to reveal "how the cow chewed the cabbage."

I know very little about the care and feeding of type-one diabetics, but I sure as bloody hell know what it's like to live within a female body and HE ... DOES ... NOT.

Look, bucko -- not all of us are 25 and having a hard time getting pregnant.  In fact, I have a sneaking suspicion that all your women who are trying to be "a serious badass" are the ones who are "doing it wrong" -- WHY are they having trouble with an intermittent fast?  IF, also known as "skipping a meal," is something everyone should be able to do.  If one CAN'T it's a sign of metabolic inflexibility or a malfunctioning liver.  Why are your lean and healthy weightlifting women unable to skip a fucking meal?

The whole purpose of paleo was to break out of the sick modern lifestyle, and help us reverse the damage done by the Neolithic Agents of Disease in our diets, exercise, sleep, etc.  It has the potential to make us look better, sure, but if one's goal in life is to be a "badass" there are some psychological issues to be addressed -- you're NOT training for the Zombie Apocalypse, no matter what kind of fantasy-life you like to cultivate.

The adaptation to be made is all about being disease-resistant, functional, and resilient.  Our n=1 experiments are all about defining what our bodies CAN do, what they object to, and what helps them operate in an optimal fashion.  Coaching people toward this goal is all about realizing that every individual is going to have to be treated differently, because "there are as many ways to god as there are breaths of the sons of men" ... and as many ways to fitness, too.

The works of certain bloggers whom I actually RESPECT have convinced me that metabolic flexibility is second only to nutrient repletion in importance, when it comes to health.  The most glaring problem in American obesity is that people who subsist on the authority-recommended high-carb diet CANNOT spontaneously switch fuels and be able to operate on the fuel they have so bountifully stored.  Even lean people have enough fat depots that there should not be a problem skipping a meal here and there.  People who are unable to do so because they become hypoglycemic have a PROBLEM, no matter how good they look.  A liver which cannot set free a little house-made glucose is a sick liver.  The body which cannot let loose free fatty acids and burn them is a malfunctioning body.

There's a lot left of this iniquitous "newsletter" but I think i'll save it till later, because this amount of horsefeathers is quite enough to metabolize in one sitting.
Posted by tess at 10:05 PM